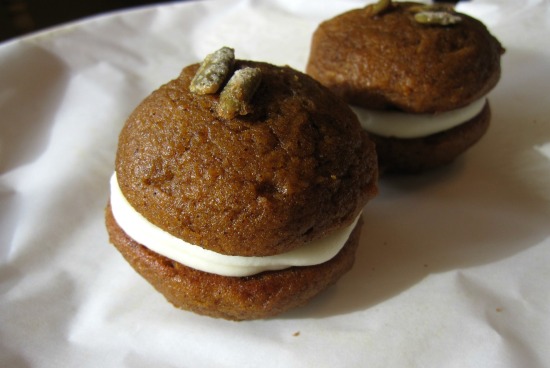 Fall is such a fabulous food season. In the heat of the summer, when farm-fresh zucchini, tomatoes and berries flourish, it’s easy to forget how soul-satisfying root vegetables are or how fragrant a fresh pear is. We get something in return for everything we give up, though. The juicy bite of a peach is traded for the crunch of an orchard apple and the tang of a buttermilk cake is swapped for the warmth of a spice cake (or an apple cider donut). This Fall, like a few in the past, though, we may experience a pumpkin shortage. And while representatives of my favorite canned pumpkin brand, Libby’s, assures that the orange stuff will be showing up on supermarket shelves soon, I’ve already started biting my nails. Although other varieties have a spot in my local markets, Libby’s will always be my pumpkin of choice.

What also begins with a “P” and is similarly scarce this season? Peanuts. So peanuts don’t conjure up any warm and fuzzy Fall thoughts, but they are equally essential to my cooler weather diet. I always have peanuts on hand, but my true vice is my peanut butter addiction. The disease is not uncommon, but I am one of its most hopeless victims. A peanut shortage has sent the price of peanut butter up and could really cramp my style. Many nights, I revel in dunking my spoon into the salty stuff before digging into some vanilla ice cream, the refrigerator light alone guiding my bite. And you thought I was a food snob? Au contraire! Ok, so maybe it’s organic peanut butter and homemade ice cream or Häagen-Dazs at the very least, but come on.

When it comes to food, I may be a purist, but I just can’t seem to muster up the ambition to roast and pulverize my own sugar pumpkin, and I think grinding my own peanut butter just might be more expensive than buying it in the store. These are two things I can and should do. But I probably won’t; therefore, I have no right to complain, especially when I have food on the table. So instead, while I cross my fingers and hope that I can turn out a pumpkin pie by this Thanksgiving, I thought I’d share one of my favorite pumpkin recipes with you: Pumpkin Whoopie Pies.

These pint-sized pumpkin treats come from Baked: New Frontiers in Baking. The whoopie is a traditional New England dessert (sorry if any PA folks are reading — doubtful), and I do have a penchant for all things homey and of Northeastern origin, but I don’t really love the traditional chocolate sandwich. Matt Lewis and Renato Proliafito echo similar sentiments in the recipe. My mom introduced me to the whoopie pie at a local Italian bakery when I was very young. It was practically pub burger-sized, and I left it to her after one bite, something I rarely did. The cakes I’ve come across are often too sticky and moist on top or too dry, tasting like a Devil Dog, a packaged cake I hated as a child. The filling is usually made with shortening or marshmallow cream, the former being flavorless and tacky, the latter being overly sweet.

A pumpkin whoopie pie, though, was something I could get into. I first had one (before they got so popular) a few years back at Henrietta’s Table in Cambridge. While not transcendent, the cake was surprisingly light, and I loved that they were filled with a fluffy cinnamon whipped cream. And they were petite. I don’t necessarily go gaga for dainty desserts, but who wants a giant cake sandwich? 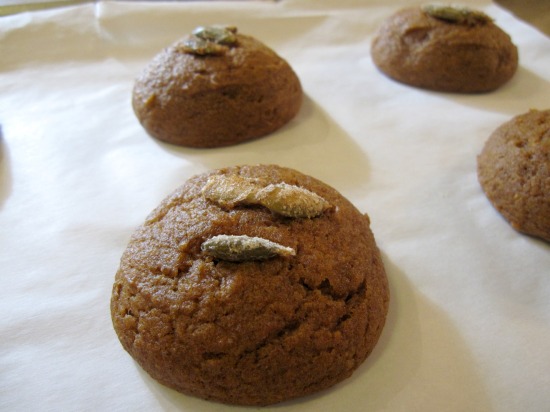 The Baked version is really a whoopie pie hater’s whoopie pie. Cloves, cinnamon, and ginger is measured in tablespoons, not teaspoons, but the cake/cookie has a perfectly balanced flavor, and the pumpkin is not at all outshined. I liked that dark brown sugar is used instead of granulated sugar, as it gave the cake that hint of molasses flavor that is so welcome during the fall. As with other spiced desserts, cream cheese filling provides the perfect tang to offset the warm flavors. The recipe calls for the pies to be chilled, which I thought I wouldn’t like, but once I tasted one, I couldn’t eat it any other way. Before baking, I topped mine with some pepitas that I candied. Even after a few days, they never got that sticky top. They’re the perfect Halloween treat, and I fully endorse using some of that precious pumpkin supply on them. 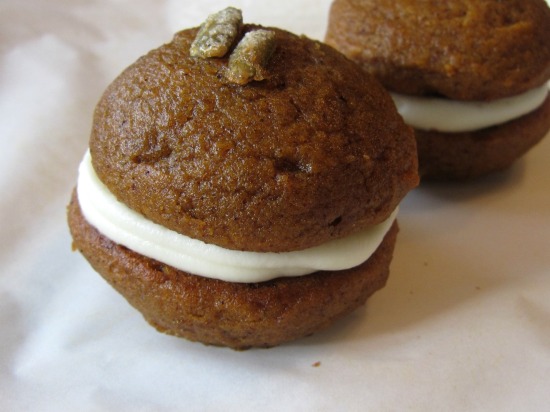 I found the recipe in Baked: New Frontiers in Baking, by Matt Lewis and Renato Proliafito (remember the Sweet and Salty Cake?) but is is also posted here.
Pumpkin Whoopie Pies
Makes 12

For the Cream Cheese Filling

3 cups confectioners’ sugar (I prefer my cream cheese frosting on the brighter side and used 2 cups, which would normally still be too much for me, but this frosting needs to be stiff enough to hold the sandwich together neatly.)
1/2 cup (1 stick) unsalted butter, softened
8 ounces cream cheese, softened
1 teaspoon pure vanilla extract

In a large bowl, whisk the flour, salt, baking powder, baking soda, cinnamon, ginger, and cloves together and set aside.

Use a small ice cream scoop with a release mechanism to drop heaping tablespoons of dough onto the prepared baking sheets, about 1 inch apart. Bake for 10 to 12 minutes, until the cookies are just starting to crack on top and a toothpick inserted into the center of a cookie comes out clean. Let cool completely on the pan while you make the filling.

Sift confectioner’ sugar into a medium bowl and set aside.

In the bowl of an electric mixer fitted with the paddle attachment, beat the butter until it is completely smooth, with no visible lumps. Add the cream cheese and beat until combined.

Add confectioners’ sugar and vanilla and beat until smooth. Be careful not to overbeat the filling, or it will lose its structure. (Filling can be made 1 day ahead. Cover the bowl tightly and put in refrigerator. Let the filling soften at room temperature before using.)

Turn half of the cooled cookies upside down (flat side facing up).

Use an ice cream scoop or a tablespoon to drop a large dollop of filling onto the flat side of the cookie (I used a disposable pastry bag and piped the filing). Place another cookie, flat side down, on top of the filling. Press down slightly so that the filling spreads to the edges of the cookie. Repeat until all the cookies are used. Put the whoopie pies in the refrigerator for about 30 minutes to firm up before serving.

The whoopie pies will keep for up to 3 days, on a parchment-lined baking sheet covered with plastic wrap in the refrigerator.

*Baked Note: Make sure you chill the pumpkin puree thoroughly before making this recipe. The chilled puree will make your whoopies easier to scoop and give them a domed top.