I have absolutely no willpower. We’re not talking about food here. In between my baking sprees and food crawls come many a salad, servings of beans, and glugs of olive oil. A true test of my ability to just say “no,” though, comes when I walk into the mecca of home cooking that is Williams-Sonoma, the outlet. It’s a place where signs advertising “50% off all All-Clad cookware” read more like love notes from a secret admirer; where walls of gadgets cry out, “I need you more than you need me;” and where porcelain wares sit empty on shelves, calling to be filled with ladles of soup, slices of cheesy potatoes, and scoops of ice cream. I mean, I almost bought a $50 tagine a couple of months ago that I really can’t afford. But it was so pretty. And hand-made and painted in Tunisia…

While I do have trouble keeping my hands off the kitchen tools, I also know well enough not to indulge in one-trick ponies. Sure, I’ll search out the perfect skillet, making sure it’s not marked on its handle with the dreaded “S,” a sign that it’s of second quality. But that skillet is American-made, will facilitate the creation of a multitude of meals and will probably do it better than any other brand on the market. But I know to stay away from that ebelskeiver pan they always put proudly on display. When the hell do I make ebelskeivers? And do I really need a corn stripper. I’m fine with my chef’s knife, thank you.

See, I’m completely rational. Except this one time when it was still 80 degrees out, but I decided I needed these cutesy Halloween stencils for cupcakes, which I like just fine, but rarely make. My feelings about the cupcake trend need a post of their own. So basically, I bought $10 plastic for a holiday that happens once a year for cupcakes that I probably wouldn’t make. That makes it a zero-trick pony? 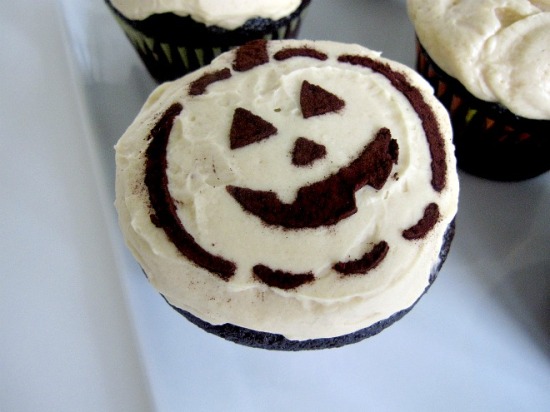 Sometimes in life, though, impulsive decisions turn into opportunities. I had finally settled on an autumnal dessert for my father’s birthday that I planned on celebrating yesterday (until an unseasonable foot of snow and a power outage crashed the party). Layer cakes don’t intimidate me, but the cake from Baked Explorations I chose seemed to frustrate many in the blogosphere because of its Caramel Buttercream. It’s a boiled flour frosting, a style I’ve used from the authors Matt Lewis and Renato Proliafito before. I liken the finished product to an egg-less Swiss Merengue, because it is silky and buttery (3 sticks buttery) and not too sweet. I love how it spreads, swirls and pipes. But bloggers used words like “grainy”, “soupy”, and “FAIL”. Those are not words I like to hear, so I gave it a go in advance, and it came out beautifully.

I didn’t want to store it until the party, and I certainly wasn’t going to chuck it. So to stop myself from downing it with a spoon, I wanted to whip up something quick, for which I had all the ingredients on hand. I decided to go with chocolate cupcakes for Halloween. Then I got crafty. And I have to say, these babies are pretty darn cute.

After having nibbled away at plenty of pieces of chocolate cupcakes off the snack tray at Flour, I knew it would be the perfect Halloween cupcake: rich, deep, dark and moist. A half-hearted baking project turned into a very tasty treat. And the spooky chocolate-caramel combo just screams for a sprinkling of salt.

If you want to adorn future cupcakes with pointy-nosed witches, scaredy cats, owls and cutie pie pumpkins, I’m sure these stencils will be on the sale table at the Williams-Sonoma Outlet…for half the price. 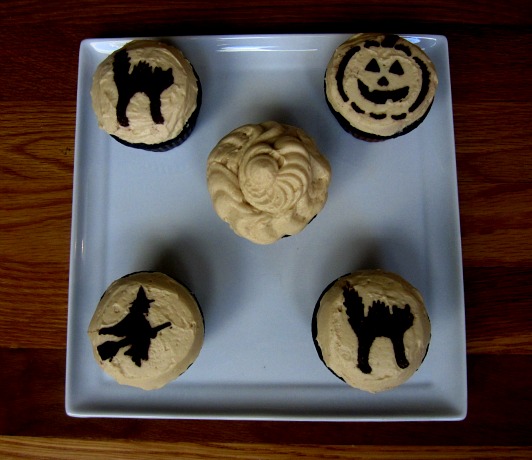 I will make that cake one day, so look out for the recipe for that sinful caramel buttercream. I got the recipe for the cupcakes from Joanne Chang’s Flour: Spectacular Recipes from Boston’s Flour Bakery + Cafe, but you can also find it here (Just don’t bake them for the written 30 minutes. Start checking at 20). Happy Halloween!