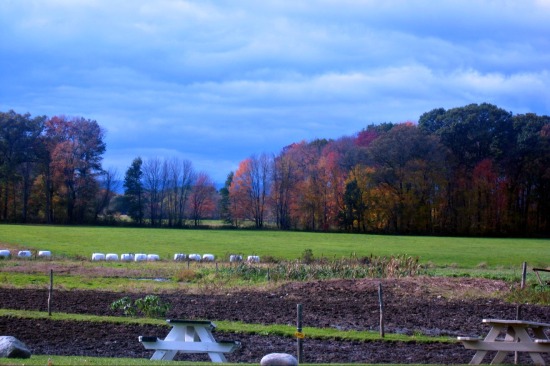 The Western Massachusetts college town of Amherst is lovely but is by no means a hop, skip and a jump away from my family’s home in Central Mass. Actually, the Pioneer Valley as a whole is beautiful and definitely worth a trip by urbanites looking to see Fall in New England in all of its splendor. During my orchard crawl, I was looking forward to visiting Atkins Farms. It was going to be a trek, but I’m willing go anywhere for apples. Plus, Western MA was near peak foliage, and the drive provided for some much-needed leaf peeping. While Atkins turned out to be a dud, my day was saved thanks to the good folks at Boston Magazine (let’s just ignore the fact that they praised the Atkins cider donuts).

When I reached the center of town, I stopped at the Amherst Farmers’ Market, which runs every Saturday from 7:30-1:30 (until November 19th). They’re early birds in Western MA, given that Boston area markets run from around 11:00 to 6:00 for those of us who don’t start the weekend by milking the cows in our backyards. While much smaller than those that serve Boston, Brookline and Cambridge, there were a lot of gems at this market.

The produce was bountiful and beautiful, and there were several farms putting high quality fall veggies on display. I couldn’t resist purchasing a few flawless baby eggplants and a cob of popping corn in gorgeous hues of gold and amethyst. A bag of warm chestnuts was a rare treat on a nippy day. Their shells unearthed sweet, fleshy meat that immediately reminded me of the holidays. Other goods included artisan breads from Berkshire Mountain Bakery and Bread Euphoria. I also came across the stand for SideHill Farm Yogurt, which I have seen in the fridge at work and, as a local dairy devotee, have wanted to try. The Whole Milk Maple Yogurt was not at all gelatinous like common unstrained yogurts tend to be. Instead, it was loose with a rich ivory color and a light, but pure maple flavor, and a clean, clear dairy taste. This yogurt is all about the milk and the quality was like no other yogurt I have ever tasted. 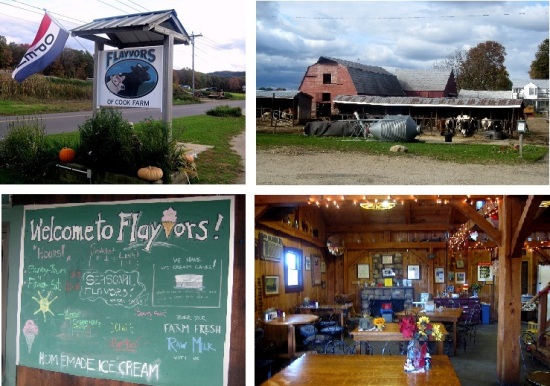 I usually leave an apple orchard more stuffed than a picking sack, but having not satisfied my sweet tooth at Atkins, I had plenty of room to try out the ice cream at nearby dairy farm, Cook Farm. Ice cream shops fall into two categories for me, and I like them both for different reasons: 1. “Gourmet” stores (think Toscanini’s) that offer premium ice cream in inspired flavors and 2. Dairy farms that emphasize their homegrown product. Often times, the ice cream has less chew and has more air incorporated into it. Flayvors of Cook Farm (surely, the “y” must signify something) fell squarely in the second category and was adorable, with an attached dining area for patrons to sit down and enjoy a scoop or a cup of soup. 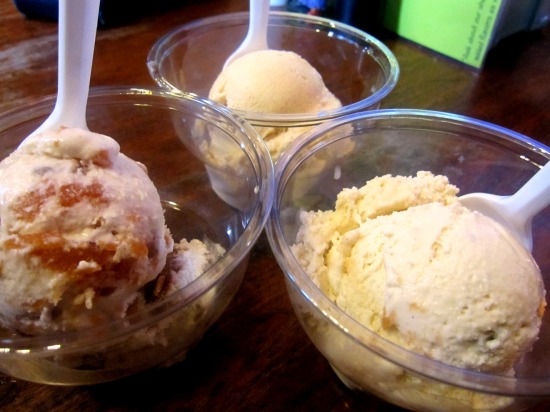 Flayvors offered a fair variety of, er, flavors, which relied on a lot of fresh ingredients for taste, not candies and copious amounts of mix-ins, which distract from the beautiful base. I was tempted by the malted vanilla, maple walnut (I sampled it, and it was divine) and the shops signature flavors, Inez (coconut ice cream with chocolate chunks and almonds) and Ginger (guess), both named after two of the farm’s cows. But for indecisive folk like me, it’s best to go with a seasonal special, as the other flavors will always be available. Since I try to consume as much pumpkin as possible before fall’s fall, I went with the Pumpkin ice cream. Unlike some pumpkin flavored confections, the flavor was not at all overwhelming. Mildly sweet, the ice cream’s subtle spices brought warmth to every chilly bite.

I also was able to grab a few bites of the Apple Crispilicious, which I was weary of, but the hunks of homemade apple crisp featured apples that still held their bite, with no unpleasant iciness. The rum raisin, a favorite of mine, redefined the flavor for me. For too long, I have settled for lightly colored ice creams with mild vanilla flavors and minimally rum-soaked raisins. Disregard its quaint country exterior; this little farm knows how to party. The ice cream was caramel colored from a much more generous shot of booze, and the raisins were plump and bursting with sweet, earthy goodness.

Sufficiently buzzed, I forgot all about that apple farm that wasn’t actually a farm and enjoyed the long ride home.