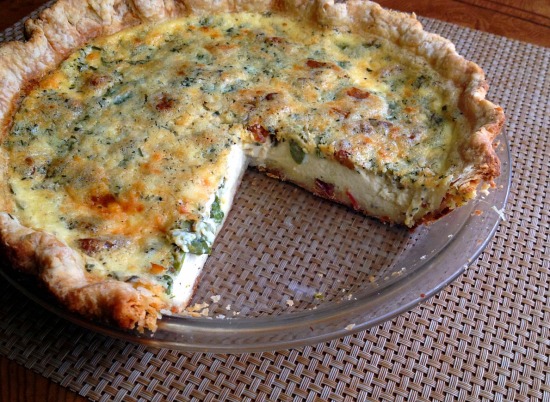 The forecasted high for today is 81 degrees. 81. I’ve been opening the windows for a couple of weeks now. It started with a hesitant crack. Always cold, I’m typically wary of the weatherman’s coos of warm breezes. But today the windows will be open wide. I’m embracing the change of air. It’s remarkable how light it feels — how light I feel. Out with the dank, in with the light.

These words aren’t surprising. Who doesn’t feel a little better when the first signs of life creep through the cracks of the drab concrete? But spring is never my favorite season. There’s something calm about winter, and spring — especially in New England — seems like a mere blip on the radar, an atmospheric tick that marks the transition from dead to lush. It’s not a pleasant blip like fall with its changing leaves and clean air. It’s often damp and humid, windy and grey. It clogs noses and sends tears to eyes. This year just feels different.

With the opening of the windows, I’m feeling wildly optimistic and almost fully confident. I’m doing more, enjoying more, achieving more. The achievements are not tangible, nor are they anything that looks good on paper; but everyday, I’m smiling more and that makes me feel good. My health is better, but, more importantly, my heart is better. Every simple moment feels strangely grandiose.

My pantry is cleaner than ever before. I’m dreaming small — yes, small. Small dreams, goals, and wishes bring excitement to every day. I’m acting more on whim. My moves are less calculated, my days off less planned. Really, this post in itself is just an example of good-weather musing. Directionless, it doesn’t read like my others. But that’s why I do this. I cherish the storytelling, the venting, the food conversations, and the rambling. Even the mechanical tapping of the keys is rewarding. For me, these are the joys that food inspires.

I tried just being for a bit. My posts have been spotty at best. Days were busy, work was consuming, but that wasn’t it. I certainly didn’t stop eating “in or out.” I went to a favorite café, I went to a new for me restaurant. I cooked a lot, I baked even more. I developed recipes that will be new favorites. Sometimes I didn’t take pictures. It was nice. But I really missed the regular documentation, the storytelling.

While I’ll selfishly keep some of those moments to myself, I want to share this springtime quiche. Quiche is my feel good food; I’ve said it before. Kind of weird, I know. The star here is fresh asparagus, which isn’t really in season until April. But since the warmth came early, I say let the asparagus come early too! I love its shape when I buy it; bunches are tied up, feathers pointing tall and north, signaling it’s time to move onward and upward. It fits my mood, my positive demeanor, which I hope, like asparagus season, is more than fleeting.

This is a French quiche with an Italian filling in an American body (does that make sense?). Shh, don’t tell. It came to me while wandering aimlessly through Formaggio Kitchen (my happy place) one afternoon. Uncharacteristically, I bought the ingredients and then planned instead of the reverse, which I unfortunately tend to do. It felt good. Bacon is swapped out for pancetta. I was lucky enough to get a peppery, house made slab, the fat thick and creamy white). After tasting a few, I chose to add a sheepy Pecorino di Pienza Morchiato (this cheese is unreal: slightly stinky, not too hard, grassy, not as salty as most) and cut it with some Parm Reg to balance the piquant with the nutty. A dash of rosemary was a surprising flourish.

For now, I hope the surprising flourishes keep charging my days. 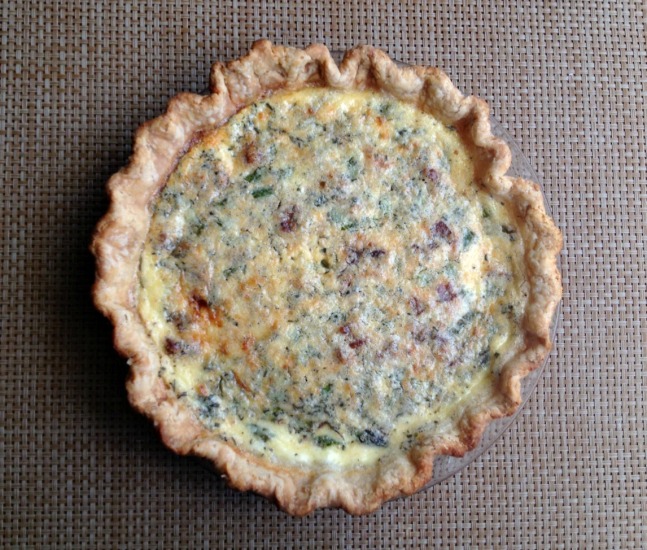 This is my standby quiche custard recipe. I always add a little flour to the custard. Quiches are so often overcooked. The filling shouldn’t look eggy or scrambled – that means it’s curdled and overcooked. You want a slice to reveal a glassy smooth custard. Adding the flour gives the quiche structure, making it easy to slice and firm without overcooking.

Like all quiche recipes, this one is easily adaptable. I really liked the Parm/Pecorino combo. If you choose one, go with Parm because many Pecorinos are too sharp on their own. I also think Fontina would be a great choice here since it’s basically the Italian response to Gruyère, the classic quiche cheese.

You can use your favorite pie crust recipe (all-butter, please) for the quiche, but I’ve linked to my standby. I will admit, I have a new favorite method for crust for savory applications along with a “new and improved” approach to pâte brisée, but that, my friends, is a long-winded subject for another day. You want something rich, tender, and flaky.

For the crust:
Preheat oven to 375 degrees

Roll out dough for crust and fit in a 9-inch pie plate. Trim the overhang to ½ inch and fold it under. Crimp the edges as desired. Let the crust chill in the freezer for 30 minutes.

When ready to bake, line the crust with a square of parchment paper and fill with pie weights or beans. Press down on the weights to distribute them evenly and up the sides. Blind bake for 25 minutes (or until crust is lightly browned). Remove the parchment and weights and return to the oven for 5 minutes or until the crust is lightly golden. Remove and let cool on a wire rack. After 2-3 minutes, lightly brush the bottom and sides of the crust with the reserved egg white. Continue cooling.

Turn oven down to 350 degrees.

In a large skillet, cook pancetta over medium heat until crisp. Transfer to a paper towel-lined plate and reserve 1/2 tablespoon of pancetta fat. Add the 1/2 tablespoon of fat back into the pan along with the aparagus, half the salt and half the pepper. Cook, stirring occasionally until asparagus is tender but still crisp (it will cook a bit more in the quiche). Set aside.

Put one whole egg in a medium bowl along with the flour and whisk together until the mixture is completely smooth. Add the remaining whole egg and yolks and whisk again to combine. Add the cream, milk, remaining salt, remaining pepper, and nutmeg and whisk until fully incorporated.

Scatter cheese, asparagus, and pancetta evenly over the bottom of the cooled crust. Sprinkle evenly with rosemary. Pour custard into the crust and transfer the pie plate carefully to the oven. Bake for 45 minutes or until the edges feel firm and the very center feels somewhat soft. You can also know the quiche is done when an instant read thermometer inserted in the center reads 170 degrees. At any point during the baking, cover the crust with a foil ring to prevent over-browning.*

Cool on wire rack at least 45 minutes to set up before sliceing.

Quiche may be served warm or at room temperature. Store leftover quiche covered in the refrigerator for up to two days.

*Rant alert: Pastry shells and pies should be pretty darn brown, not pale. Dark golden crusts are not burnt and have the best flavor.