Tuesday, New Year’s Day, I plucked the last beaded decoration off my Christmas tree, wishing I could keep it there just one more week, maybe two. Lights were unstrung, the tree went away, and the living room was restored to its normal twinkle-less state. Although I hadn’t slowed down and realized it was actually the holiday season until about a week before Christmas day, I found myself wishing the light would never leave. I’m not a Christmas fanatic. You know the type. That’s not me. But with the tree take-down, I felt myself wishing I were. I felt like I did as a kid going back to school after the December break. Christmas fanatic or not, the holiday is, for me, that little something to look forward to. Because after that, it is winter. Not winter-solstice-technical winter, but the winter you can feel, from skin to bone. 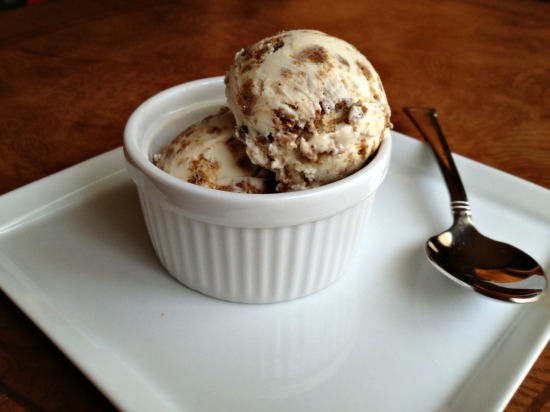 I hate winter — real, post-Christmas winter — with every fiber of my oversized sweaters. Of course, it is quite beautiful in its quiet, in its purity, in its clean smell. But that falling snow that I longed for in December, to decorate the rooftops with white and to pile up on my windowsill, will no longer be appealing. Its white is more noticeably tinged with black from soot, and foot traffic, and car tires. The plows will become menacing. The wind, which in December dotted my cheeks with a pleasant blush, will begin to numb my nose, my face, my heart. I won’t go from place to place with conviction; I’ll schlep to and fro. I’ll miss the music and the lights and, dare I say it, the fanfare. I’ll miss the color. I’ll long for the warmth of cinnamon, the hug of nutmeg, and the spice of ginger. I’ll miss the flavors; they’re some of my favorite. 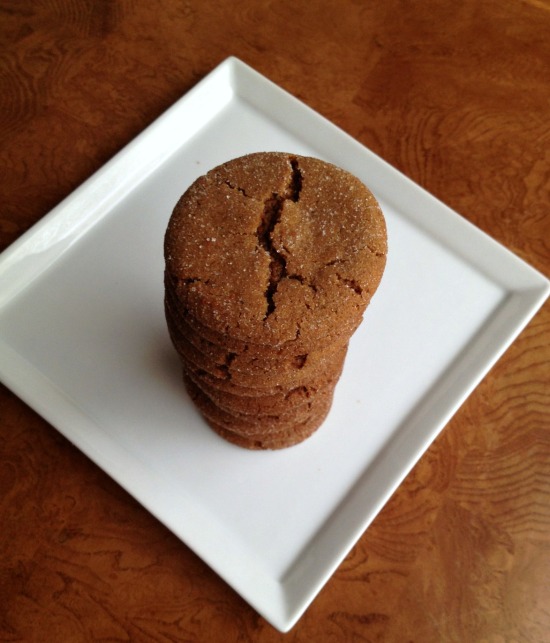 Right now I have one thing to keep me in the moment: a tall tower of the best gingersnaps ever. This is not necessarily a good thing. It probably makes me even more wistful. Their presence in my home makes me forget that “good winter” is behind, not in front, of me. But holding onto a piece of the magic is keeping me at least a little upbeat. Crunching down on the gingersnaps’ ultracrisp bodies and taking in the flavor and aroma of the season is insulating my mind from the freeze. But no matter how enthusiastically I consume my sadness, I will not be able to conquer what were originally 80 gingersnaps alone — or with help for that matter. Good thing this cookie, with its two-week shelf life, is so darn versatile. Buttery homemade gingersnap crust? Great idea. A coating of crumbles atop morning yogurt? Perfect. And with all of these snaps, I can do those things…several times over. But one use, despite the chill, called to me. These crackly cookies were meant for ice cream.

I dreamed of recreating one of my favorite flavors at my beloved Toscanini’s: Gingersnap Molasses. I had leftover molasses and fresh ginger waiting to be manipulated. But then, as the holiday memories kept flowing in and the seasonal depression set in, I thought of a dessert I served for Christmas, I think four years ago — one I crave regularly but never find myself with an occasion for which to make it. It’s Dorie Greenspan’s fantastic Brown Sugar–Apple Cheesecake. With a gingersnap crust. I don’t love it just for its fall/winter flavors, but for its luxuriously light and creamy texture. Although apple season is over, the cream cheese–heavy cream base of this cheesecake alone is delightful and the inspiration for my gingery scoops.

I used David Lebovitz’s cheesecake ice cream (most likely the quickest and easiest ice cream base you’ll ever make — perfect if you’re still tuckered out from holiday baking) as a starting point, I adapted it to mimic the flavor of my beloved cheesecake, and I added some of those intensely spicy gingersnaps to the mix for “the crust.” I’m not typically the biggest fan of mix-ins, as they break up the creamy texture and appealing flavor of the base. But when the mix-in is this good, I can get behind it. The super-tangy, creamy ice cream is a beautiful flavor pairing for the cookies — like cream cheese frosting to carrot cake — and the molasses in the brown sugar heightens that in the cookie. It’s the best of the warm and the best of the cold in one. 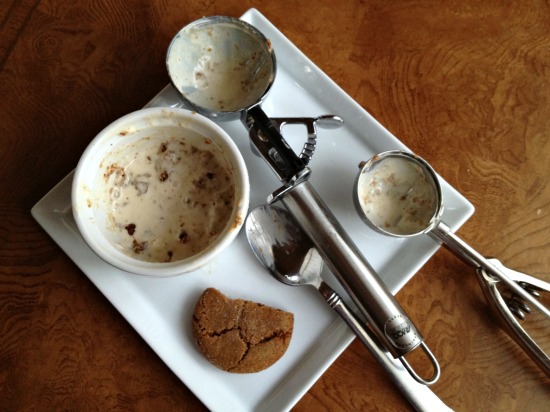 You can use any gingersnap recipe you would like (or store-bought gingersnaps), but I would try to use one that turns out a very spicy cookie. The cookies will maintain a crunch within the ice cream for 1-2 days. After 2 days, they will soften, but the ice cream is still delicious at this point.

Process sour cream, cream cheese, sugar, half-and-half, lemon juice, bourbon, and salt in blender until completely smooth (this should take no less than 30 seconds), scraping down sides of the blender as needed. Transfer to airtight container and let chill for 8 hours.