It’s over. The experiment is over. Winter is here.

Remember this? You thought I was crazy. You were ready to revoke my dessert-lover’s license. I may be crazy but this year, like every year, I did not have a hard time avoiding chocolate from mid spring-December. (And I’m talking real chocolate; the use of white *cough*sweetened cocoa butter*cough* chocolate was totally acceptable.)

This certainly does not (as I tried and failed to explain in my farewell post) mean that I didn’t eat chocolate or chocolate-laced baked goods made by others. I was not following some sort of regime or cleanse. I eat chocolate everyday, and I definitely indulged in plenty of chocolate desserts and pastries while out and about.

But since I did not use my hands to manipulate it—chop a big block of it with all of my might or stir it ever so carefully as it melts into velvet in the bowl of a double boiler—I was still somewhat disconnected from it. Now I am craving something rich, dark, and maybe a bit gooey like I never have before. But the process was justified. I didn’t long to bake with chocolate. I was distracted for the reasons I outlined: The fruits and the flavors of late Spring, Summer, and Fall are too intriguing and too fleeting to put on the back burner. The yearly experiment is a way to broaden my baking horizons and stray from the obvious, from the universally loved. 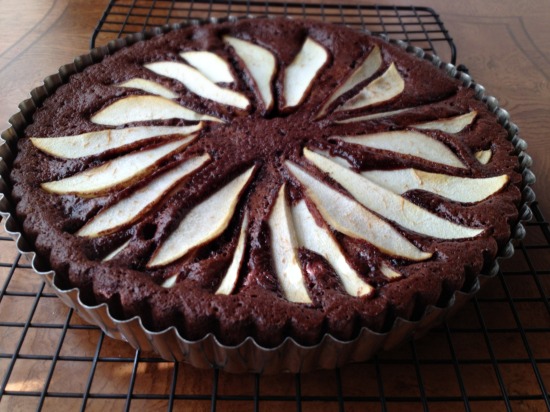 So now I’m saying welcome back. It’s a new year. It’s cold. And I’m ready to open my embrace to the warm hug that chocolate provides. I’m ready for it to melt on my tongue. I’m ready for cocoa powder’s earthy depth; dark chocolate’s bitter, almost acidic, twang; and milk chocolate’s caramel smoothness.

This chocolate dessert was the perfect place to start. It’s sleek not overwhelming, and also serves as a parting farewell to one of my favorite fall/winter fruits: the pear. Its a bridge between the two halves of my year in baking. Pears have just a couple more weeks before they will be stripped of their perfume and succulent juices. In a way then, this tart is a hello and a goodbye in one. And it nicely echoes my final chocolate dessert last spring: the Chocolate-Pistachio Tart, a real winner. The use of nuts is crucial to the success of both tarts. Pistachios pepper the crust of the Spring tart and make up a fragrant nut butter that rests under the silky baked ganache, while almond flour makes up the body of this (gluten-free) chocolate frangipane tart. They’re both slim and sleek. Swallowed by a pedestal, they do better on a flat serving platter. At the same time, though, both their appearance and their taste carry a presence. They’re rich and silky, but they have body. And they’re both brought to you by Martha Stewart’s New Pies and Tarts. 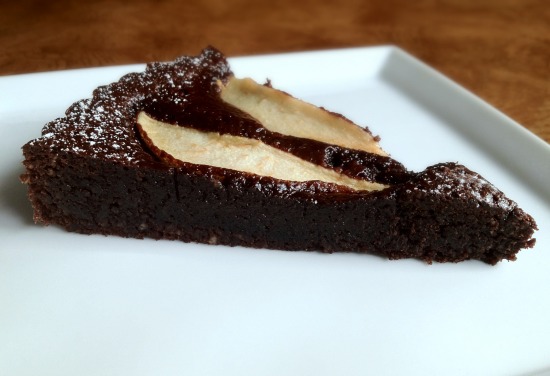 A bite of this new tart, though, is quite different texturally. It can make even the most reluctant dessert eater swoon. It’s soft with the texture of traditional frangipane that walks the line between cake and custard and the smooth fudginess of a brownie. But it’s sophisticated, not playful, in its fudginess.Such a simple tart in both its ingredient list and prep manages to combine the dark, rich flavor of the cocoa powder with the sweet, floral flavor of almond, and the honeyed nectar of fresh pears, which bake without losing all of their bite as the whole tart puffs playfully up and around them. It’s the perfect was to say goodbye to good friends and hello again to new ones. Make it soon, before it is too late.

I like to serve this tart with very softly whipped cinnamon cream s it just dabbles elegantly off the side of the tart. I love cinnamon and chocolate, cinnamon and almond, and cinnamon and pear, so it only made sense. But amaretto whip would be great, too! I’m linking to the recipe since the only things I did differently were to chill the filled tart pan while preparing the pears so the slices don’t sink into the batter so readily (this is thinner than traditional frangipane) and skip the glaze on the pears since I prefer a more rustic look. For my fellow scale-users out there, however, I have transcribed the ingredient list below.