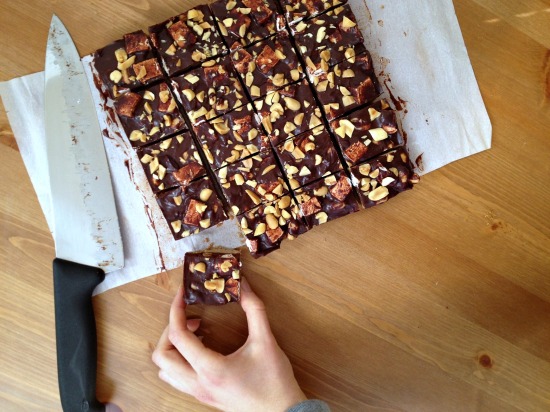 I like to think that I have a magic tongue.* A tongue so vital and active and curious that it must possess neurons and synapses and such. It can taste and feel what’s not on it. Sometimes I find more sense and more wisdom in that tongue than I ever could in my actual brain. It’s sensitive to idea. Inspiration strikes just about anytime and that crazy, infallible tongue won’t stop thinking and wagging and thinking some more until dream is reality and foodstuff comes from oven.

These crazy bars are a product of that overactive tongue. You see, there’s a restaurant in Cambridge, MA that I haven’t visited, though I should have ages ago. This restaurant, West Bridge, received rave reviews in various publications when it opened in June 2012. Popular then was the restaurant’s fun fried chicken skin appetizer, Peas and Favas on goat cheese cream with shitake mushroom bacon (!) and red quinoa, and an egg in a jar that involves just about everything delicious in life. But it was a dessert that kept popping up that I’ve never actually consumed but that I immediately “tasted” each time I saw it: the S’more Verrine, which consists of chocolate panna cotta, housemade fluff, graham cracker crumbles, and miso syrup.

Dang. Why hadn’t I thought of that? I’ve added white miso to ganache and caramel for a good while now since I’m a devotee of all things sweet, salty, and fermented. The tongue wagged. The tongue that doesn’t even like marshmallows or feel very strongly about s’mores at all. And the tongue made the lips mouth “miso s’more bar” since I had seen a s’more bar in a baking book that I own. That crazy shit needed to be real.

I have no winsome tales to tell about s’mores. My earliest memory of one doesn’t involve children gathering around a campfire, telling stories, unwrapping countless Hershey’s bars, and swallowing fire off of sticks. Though that sounds awesome. My youngest years were spent in an apartment complex that didn’t allow for grilling outdoors, except for on the rusty built-in hibachi-like contraptions that were practically located in woods, near what was probably poison sumac.

So I had my first chocolate-marshmallow sandwich at a Girl Scout retreat to Walden Pond. We “camped” in a large Christian community center, laying in sleeping bags on a polished hardwood floor. We all had to help out with dinner in the building’s mess hall–like kitchen: shitty square pizza that elementary schools serve, corkscrew pasta with ultrasweet jarred tomato sauce, and iceberg lettuce salads with gloppy white dressings were on the menu. Dessert was a surprise: Inside foil wrappings were two graham crackers, oozing milk chocolate and hiding a melted marshmallow that looked like Frosty when he melts at the end of the movie. Thoreau wouldn’t be pleased.

Clearly, my first s’more was all wrong. It had been “baked” in the oven. As a result, the marshmallow had no charcoal smoke flavor and it wasn’t merely melted, it was spent, with no sticky chew left. The Hershey’s bars, which usually melt only from the heat of the torched marshmallow, no longer had that silky bite that provides texture and a thick wall which yields to crisp cookie. My troop was whack, and I got the hell out of there after third grade. I was an elementary school student with conviction.

On the outside, this “dessert”—though I’m not sure that you can call it that—rendition of that treat with which I have little history isn’t really my style. It doesn’t look like the other baked goods on this blog (and it certainly doesn’t look like the dessert in my last post). You can see that it’s a bar cookie and that it’s topped with ganache and filled with shit—sugary mix-ins, that is, like sweet and lean marshmallows. It looks downright candylike. I like good candy and I like desserts, but I don’t love candylike desserts (though I can be convinced otherwise sometimes. And this recipe features the first bit of chocolate to appear on this blog since May, since I avoid baking with it from June to the Holiday season. Usually it comes in a bit more, well, demurely.

But after pushing off this dessert over and over again—it was never the right time—I decided that October or Halloween, a season when stuffing my face with something a little less refined, a little fun, and a little f-ed up is totally acceptable. And luckily, on the inside, these bars are pretty darn complex. A graham shortbread that gets its flavor from a mixture of AP flour, whole wheat flour, and wheat germ replaces the more common crust for s’more-inspired desserts made from melted butter and crushed graham crackers. It makes a bar feel a little less like a candy bar and more like a dessert. A thick, perfectly silky ganache topping may seem too rich, but its flavor is pointed up by the salty, somewhat funky flavor of sweet white miso and the fact that it’s not made with Hershey’s milk chocolate. Homemade marshmallows, not Jet-Puffed, and peanuts, for crunch, are folded in. And although these treats may be inspired by that S’more Verrine at West Bridge, I think that they more so deserve to share the name of the beloved Fluffenutter dessert at another local favorite, The Gallows, which many refer to as the “Stoner’s Delight.” Well, this might just be Stoner’s Delight II.

*I was not under the influence when writing this sentence, nor did I purposely slip in any innuendo.

You want the overall cacao content of the bars to be around 55%—higher than an average semi-sweet chocolate and lower than an average dark chocolate. Working with 8 ounces of chocolate total, use whatever combinations of dark and milk chocolate necessary to reach that percentage or something in the ballpark. What I used is reflected below.

The amount of miso you use depends on your tastes. The lower range of miso will give you a ganache with a distinct saltiness but not too much actual miso flavor. As you inch up to 3 tablespoons, you’ll experience more savor and funk. I prefer the sweeter flavor of white miso for this recipe. Adjust amounts accordingly for other varieties of miso.

1. For the graham shortbread base: Adjust oven rack to middle position and heat oven to 350 degrees. Line bottom and sides of 8 x 8-inch square pan with 2 pieces of aluminum foil or parchment paper. Whisk flours, wheat germ, cinnamon, baking soda, and salt together in bowl; set aside.

2. In bowl of stand mixer fitted with paddle, beat butter, sugar, and honey on medium speed until pale and fluffy, 1 to 3 minutes. Reduce speed to low and mix in flour mixture until just combined, 30 to 45 seconds.

3. Gently press dough into bottom of pan in even layer, reserving about ¼ cup of dough for patching if necessary (dough should measure about ¼ inch or so thick. Poke dough all over with fork. Bake until shortbread is dark around edges and deep golden brown in middle, 30 to 35 minutes, rotating pan halfway through baking. Transfer pan to wire rack and let shortbread base cool completely.

4. For the ganache topping: Place chocolates in medium-large bowl. Bring cream, miso, and corn syrup just to boil over medium heat, whisking to break up and incorporate miso. Pour cream mixture over chocolate and let sit for 30 seconds. Starting from the center and working to the outer edge, gently stir cream mixture and chocolate together with rubber spatula until chocolate is fully melted. Fold in marshmallows and whole peanuts and pour over cooled shortbread base, spreading into even layer. Sprinkle top with chopped peanuts and refrigerate bars until set, about 3 hours. Cut into 20 pieces and serve. (Bars can be covered tightly and refrigerated for up to 3 days).

There are many things you can do with the leftover marshmallows, but I suggest toasting the hell out of them if, like me, you’re not crazy about marshmallows on their own. Caramelization makes everything more interesting.

1. Line bottom and sides of 8 x 8-inch square pan with 2 pieces of aluminum foil or parchment paper and grease foil or paper. Whisk confectioners’ sugar and cornstarch together in bowl; set aside.

2. Sprinkle gelatin over 58 grams (1/4 cup) cold water in bowl of stand mixer fitted with whisk. Let sit for at least 15 minutes until softened. Turn mixer to low to break up gelatin mixture.

4. With mixer running on low, slowly pour sugar syrup into gelatin mixture until incorporated, avoiding sides of bowl and whisk. Increase speed to high and whip until mixture is bright white, voluminous, and stiff, 7 to 10 minutes, scraping down bowl as needed. Add vanilla and mix briefly to incorporate.