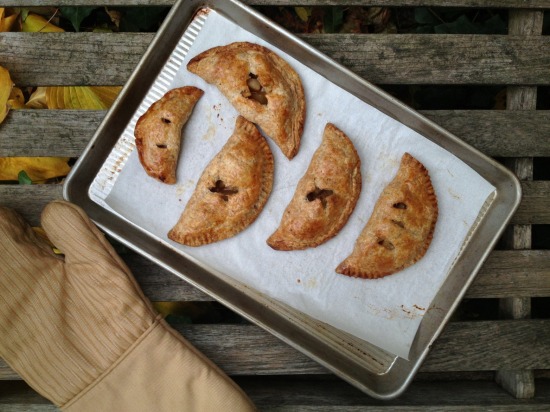 October grasped me close, its winds embracing me with their autumnal might. I walked around, taking the long ways and breathing in October’s clean air. Strong branches held my weight and picked me up and guided me from place to place. Shortcuts can wait until it’s too cold to think. October’s fire—from the leaves, from the sun, from good people—warmed me on its chilliest days. October went out with celebration for the team of a home that was a bit battered this year. October was a strong month.

And October was a good month. A good month for my soul. The best month I’ve had in many.

Then November 1st dawned. It was an unseasonably warm, wet, and humid day. I walked in rain boots that lost their traction over batches of soggy brown leaves. November 1st and its voracious winds stripped me bare. I arrived at work sweaty, soggy, and caked with sand that found every available empty space in my eyes. November 1st was a literal damper on the joy that October gifted me. I had already been stressed about November’s arrival—its interruption of the calm that I’d been waiting so long to experience. And for that, it didn’t disappoint. But November 1st became November 2nd. The skies cleared, and the air became crisp again.

I “discovered” my backyard for the first time last Saturday. It was another unseasonable day, but the air was clean this time. I knew that this space was there, but the area felt forbidden—like that closet that TV parents tell their kids to never open. Hidden by what seemed like a rainforest worth of unwieldy greenery, it was the danger zone all summer. But one day a man came with trimmers and hackers and, magically, a sidewalk-lined pathway opened by the side of my house. The man did a messy job—landlords (or their spouses) are never meticulous—but he did the job. I still didn’t look. Most things that are hidden by bush are hidden for a reason, right?

But I went back there this weekend, perhaps looking for adventure to brighten my mood. I followed the path until nature let me go no further. My toes reached a bed—well, a mess, really—of yellow and green. To my left was a fence with the prettiest green ivy growing elegantly up it like an intricate embroidered pattern on a Mexican wedding dress. Directly in front of me was a wooden bench in good shape. While I sat on it, my feet were covered by uncleared fern, but they enjoyed getting lost in the leaves.

And there was company. There were faces. Faces of stone fairies, and frogs, and other shit with which I wouldn’t choose to decorate my own property. But in that moment, they didn’t seem gaudy to me. Their presence added to the whimsy and magic of my gest. 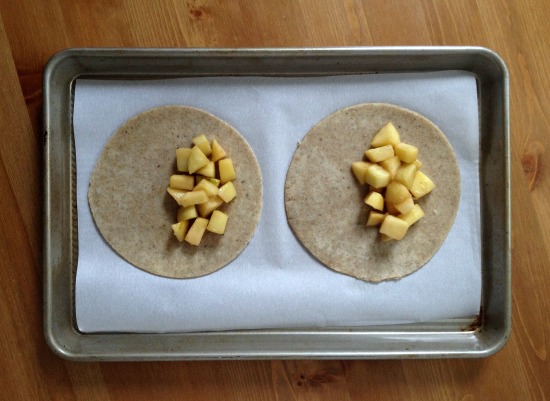 I also made hand pies that day. Simple apple hand pies to celebrate my beautiful October. Knowing that November was giving me anxiety, I turned to the one fact about the month that always brings me joy: November begins another pie season. That means mixing and cutting and kneading and rolling and crimping and all of the things about pastry that teach me to be thankful for having found this hobby, profession, and life—the life that saved me from monotony. 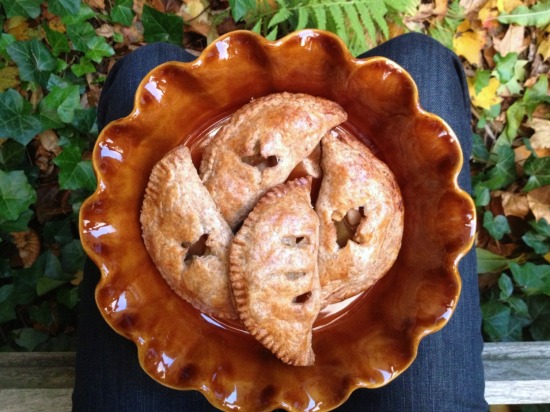 I’ve been hesitant to pursue hand pies. I tend to stray away from the overtly cute. And though it’s clear that I value good crust, I tend to enjoy the filling to crust ratio in a standard pie better than that in a hand pie. So for a hand pie to hold my interest, it would have to feature really awesome pie dough. And not an ordinary one, though I love my standard recipe and method. Knowing that my filling would be apple, I thought of rye flour. I knew that the fruit and flour would jive, and that the simple combination had the possibility of captivating me.

This dough. Oh, this dough. An adaptation of Kim Boyce’s great recipe in Good to the Grain, this dough is, perhaps, life-changing, a word that gets thrown around too much. It is life-changing, because I would be tempted to use it exclusively for all of my pies if time allowed. And in that sense, it is at least changing my pie life. It’s really a rough puff pastry. The method is perfect for a rye dough, because it helps “uplift” the heavier whole-grain flour, turning the dough into something that manages to be even flakier than your standard well-made AP flour–based pie dough. In fact, half the volume amount of flour is rye—a much larger amount than most whole-grain flours take up in baking recipes. Perfect texture and rich, nutty flavor.

Because apple goes nicely with caraway, I added some (totally optional) ground caraway seed to the pie dough. It’s not enough to make the dough taste like a deli sandwich; it tastes primarily nutty and a bit sweet, but the caraway does give a nod to the flavor that some people probably think that rye tastes like on its own. And while I didn’t have Thanksgivukkah in mind when I came up with this recipe, I have a feeling that this dessert would be a cute finale to the Thanksgiving/Chanukkah feasts of those who celebrate (I only wish I did). 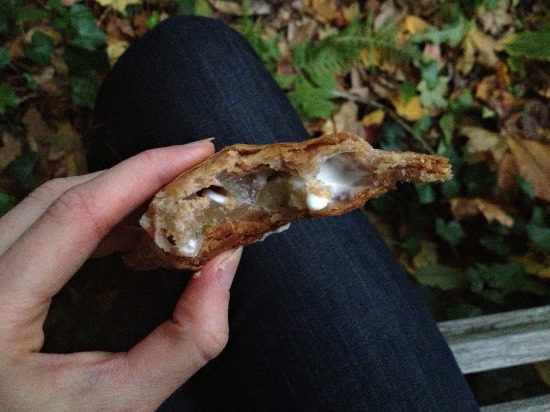 I prefer the size, appearance, and dough-to-filling ratio of the larger hand pies, but I also made small ones. This recipe yields about 18 hand pies if you use a 4-inch cutter. You can also piece together the scraps to make smaller, 4-inch hand pies, which, believe me, I did. I’d hate to waste that magical dough.

For apples, I used a mixture of Cortland, Cameo, Granny Smith, and Jonagold. A 12-inch skillet should work instead of the sauté pan if you don’t have one.

1. For the pies: Using fork, mix sugars, cinnamon, lemon zest, nutmeg, and salt together in small bowl. Melt butter in 12-inch sauté pan with straight sides over medium hear. Add apples and cook, stirring occasionally until apples just begin to soften around exterior, about 2 minutes. Stir in sugar mixture, coating apples. Apples will begin to release their juice. Cook mixture until juice is reduced and coats apples, 6 to 8 minutes. Stir in cornstarch and vinegar and stir to coat evenly. Transfer filling to bowl and set aside.

2. Adjust oven rack to middle position and heat oven to 400 degrees. Line baking sheet with parchment paper. Using bench scraper, cut dough rectangle in half crosswise. Return one half of dough to refrigerator. Roll one half into about 13 by 13-inch square that is 1/8 in thick. Using 6-inch cutter (or an overturned 6-inch bowl), cut out 4 circles. Refrigerate circles and repeat with remaining dough square.

3. Place about 11/2 tablespoons apple filling off-center on each dough circle. Brush edges of pastry circles with accumulated apple juice. Fold over pie and press with tines of fork or fold over and crimp to seal. Score pies and freeze for at least 30 minutes or up to 1 month before baking.

4. For the crème fraîche: Meanwhile, fold maple syrup into crème fraîche until combined. Refrigerate mixture for at least 1 hour or up to 1 day before using.

5. Transfer frozen pies to prepared baking sheet and bake for 10 minutes. Reduce oven temperature to 375 degrees and bake pies for 20 to 30 minutes longer, rotating sheet hallway through baking until crust is well-browned and crisp. Let pies cool for at least 15 minutes before serving with crème fraîche.

Rye Pie Dough for Double-Crust Pie
adapted from Good to the Grain, by Kim Boyce

Pulse flours, sugar, caraway seeds, and salt in food processor to combine. Add frozen cubes of butter and pulse until butter is the size of peas and hazelnuts. Transfer flour mixture to large bowl.

Starting with ½ cup (113 grams), drizzle ice water over flour mixture and fold in with a rubber spatula, trying to get the dough to clump and hold together. It will not form a neat ball and still will look shaggy, with dry flour mixture remaining. If you can’t pinch a piece together, add up to 1 more tablespoon water.

Dump flour mixture onto piece of plastic wrap and gently and quickly knead, smearing dough with heel of hand just to make dough cohesive enough to form into rough square. Wrap dough square in plastic and refrigerate for at least 1 hour or up to overnight.

Place chilled dough on lightly floured counter. Roll dough into rectangle that measures about 11 by 14 inches. With long side facing you, fold dough into thirds like business letter. Rewrap dough and refrigerate for at least 15 minutes. Repeat rolling and folding three more times. Refrigerate dough for at least 2 hours or up to 2 days before using in recipe.