We were welcomed by the coolest of cats. Smooth as a sax player, he had long, neat dreads that fell halfway down his back, and he wore a relaxed vibrant purple silk shirt, unbuttoned lower than another guy could get away with. We said that we had a 6 o’clock reservation, and we followed him slowly—he had a bum leg—to a two-seater. When we sat down, a woodsy scent drew our noses to the small potted thyme plant at the center of the table. Fun.

This was my and my mother’s first impression of a local restaurant, Garden at the Cellar when we met there maybe about 5 years ago. The restaurant is above and connected to another bar and it lives in an unnamed area on Massachusetts Avenue between Central and Harvard Squares in Cambridge, MA. We had planned to eat there because we knew that we could get a good but simple bite after a late lunch and before a trip to my apparently oft-mentioned favorite ice cream shop, Toscanini’s. And we did just that. The restaurant, a bit like a gastropub, was pretty well known for nibblies of the fried variety—tater tots, rosemary truffle fries, doughnuts…with fois gras. So we started with chicken and thyme croquettes, which were OK. My mom got hanger steak-frites (the fries were good), and I got a crock of tomato soup that came with a grilled cheese. The meal wasn’t particularly interesting, but it was certainly comforting and well executed. And that’s what we wanted. In lieu of dessert, a miniature square of Taza chocolate was served. We had a wonderful time catching up, and I left thinking that I wouldn’t make an effort to come back but that I could see myself frequenting it if I lived in intra-square Cambridge—it was a perfect neighborhood spot.

But I was back. I was back many times. And We were back a couple. For no obvious reason at all, my mom and I found ourselves drawn there together and apart. I’d had a tiny crush on Will Gilson and the romantic idea of his parents’ herb lyceum, but I assure you that that wasn’t it. I just felt warm there. I remember a fregola-filled twist on a favorite soup, avgolemono (chicken-egg-lemon) on a cold day; a perfectly-cooked rabbit; a simultaneously hearty and light root vegetable salad; and a burger, with sharp cheddar, caramelized onions, arugula, aïoli, and peppery bacon (optional, but who am I kidding?)—a standout in a city where everyone has a burger on the menu. And I had made my way through the fried things, for which I think Gilson only begrudgingly enjoyed being famous. 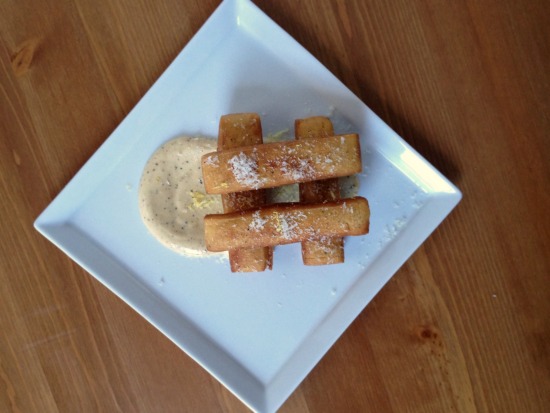 This little tale might mean nothing to you. But it should because from it, you get these delicious chickpea fries. The chickpea fries were the last of the fried things I tried at Garden at the Cellar and perhaps the best. They were wide rectangular planks that came stacked like Jenga blocks. Super crispy and light on the outside; soft, earthy, and deep on the inside. Addicting but complex enough to make that addiction more than mindless like it can often be with French fries (which I do love). I remember a lemony browned butter mayo-like sauce that was spread beneath the Jenga blocks, maybe a drizzle of browned butter on top (I left this out to leave the lily ungilded), a sprinkling of salty parmesan, and a garnish of fried sage leaves. Hopefully that is accurate. Chickpea fries are actually just rectangular versions of the Italian chickpea fritters called panelle. But these are so much more fun and pillowy. And if I can guarantee anything, it’s that this browned butter mayo will change your life. Rich, nutty, tangy, and peppered with blackened flecks of milk solids, it will make your next dollop of Hellmann’s taste so, so inadequate. Simply replace two-thirds of the oil in traditional hand-whisked mayo with deeply browned butter and you’ve got it.

Gilson left GATC a couple of years ago to work on personal projects and to eventually open his more upscale and daring restaurant Puritan & Company, a celebration of his deep New England roots and of the creativity and skill that he possesses. And since his departure, I have not been to GATC. And I’ll never return. I don’t want to tarnish the image of those days. Those days of me and the man and the chef and the mom and the chickpea fries. 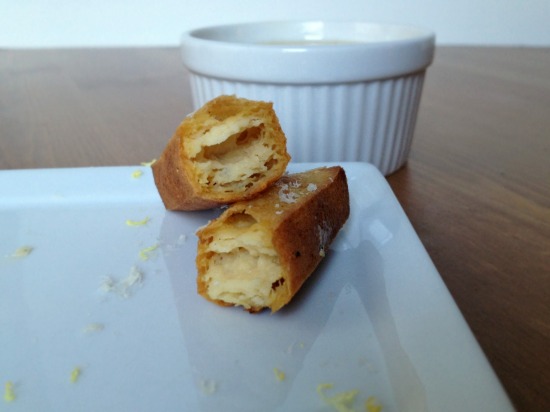 If your mixture ends up being lumpy from spreading, it’s OK. The fries won’t look as nice (craggy rather than flat), but the insides will be just as creamy and delicious.

2. Whisk yolks together in bowl for 30 seconds. Add 3 teaspoons lemon juice, salt, pepper to taste, and sugar and whisk until light in color, about 30 seconds more. Very gradually pour in half of butter mixture, whisking vigorously and constantly (this should take at least 4 minutes). Repeat with remaining butter mixture. Set aside mayonnaise.

3. For the Fries and Garnish: Line 8 x 8 inch baking pan with parchment paper. Whisk chickpea flour and pepper together in large bowl. Bring water, oil, and salt to boil in large saucepan. Pour over chickpea flour and whisk until batter-like mixture forms. Immediately transfer chickpea mixture to food processor and process until lumps are gone. Immediately transfer mixture to now-empty saucepan. Cook mixture, stirring frequently with rubber spatula, and scraping the sides and bottom of pot over medium-high heat until mixture boils, about 1 minute. Reduce heat to simmer and cook, stirring frequently, until mixture has thickened but still leaves a trail when a track is made with spatula, about 2 minutes. Immediately transfer mixture to prepared baking pan (do not scrape leftover from pan), pouring in even layer. Shake pan back and forth to create even layer and fill in empty spaces (do not spread with spatula unless mixture has set too much to move; this creates a smooth surface) Tap on counter. Let cool for 30 minutes, then place square of parchment against surface of chickpea mixture and refrigerate for at least 1 hour or up to 24 hours.

2. Set oven rack in middle position and heat oven to 200 degrees. Set wire rack in baking dish. Pour oil into 8 to 10-inch skillet to a depth of ½ inch. Heat oil over medium heat until it registers about 360 degrees F, adjusting heat as necessary. Meanwhile, remove chickpea mixture from baking pan with parchment and transfer to cutting board. Slice mixture into fries about 4 inches long and ¾ of an inch wide. Set aside.

3. Once oil comes to temperature drop sage leaves into oil and fry until crisp, about 1-minute per side. Let sage drain on paper towel–lined plate, then transfer to second plate. Return oil to 360 degrees, drop 4 to 6 fries in oil, and cook until golden brown, turning fries halfway through frying, about 6 minutes. Transfer fries to towel-lined plate to drain and then to prepared wire rack. Transfer baking sheet to oven. Repeat with remaining fries.

4. If you wish to plate the fries rather than gobble them right up, spread layer of mayo on plate, top with stack of fries, sprinkle with Parmesan and lemon zest, if using, to taste, and top with sage leaves.