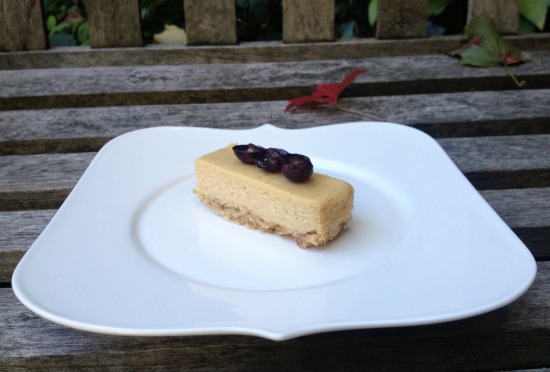 Concord grapes are a New England treasure, as they were developed in—go figure—Concord, Massachusetts. Now they are most widely grown in other regions of the country, but it’s nice to know that little old Concord was the birthplace not only of freedom but also of the grapiest of grapes. Concord grapes are so grape-y that they may even seem artificial to first-time eaters. They’re very sweet, yet tart as well; they are the fresh fruit incarnate of grape jelly (and, less virtuously, of grape candies and grape soda).

Like other grapes, Concords are in season now, which is a hard concept to grasp, as many do not have access to locally grown grapes. Probably thought of as simply a California thing (have you seen the commercials?), folks buy overly elongated and mutantly large grapes in bags at the supermarket. They’re tasty enough. But local grapes, at least in these parts, are very different: rounder and often with thicker and more flavorful skins, they’re complex, musky even. The green are not sour; the red are not bland. And the Concord grape has the thickest skin of them all. Biting into one (be careful of seeds) is like experiencing grape times infinity: taut squeeze, rip, POP. They’re juicy and packed with flavor.

So while for many, including myself, fall is marked by apple and pumpkin recipes, I still, even though it’s October, crave the visual variety of summer fruits: the rainbow of reds, yellows, blues, purples, oranges, and greens. Apples, pumpkins, and pears are hardy fruits; grapes, however help ease the pain of losing a whole lot of summer produce since they have a berry-like sweetness and texture. I mostly use them in savory recipes or appetizers (roasted sausages and grapes with polenta is an easy-to-make favorite) and ignore them for the last course. I’ve made nothing with them on the sweet side besides a simple almond cake. I wanted my late entrée into real fall baking (I guess this counted too) to feature those beautiful jelly-making Concord grapes. And what goes with jelly…

Yes, of course, my love, my addiction, peanut butter. This dessert in some ways is very personal; in other ways it is not. It’s hard for kids or adults to dislike creamy peanut butter cheesecake, but I think adults might appreciate it more for its lightness; the cheesecake isn’t weighed down by the peanut butter. The crust is inspired by how I paired my PB&Js as a kid: I liked to put chips in the sandwich as I did for tuna (salty-sweet, plus PB&J needs crunch) and I’d usually eat a granola bar with it. The crust is a mashup of those, made of oats and chips—it’s almost like the chips are the nuts in the granola. After testing different chip options I actually landed on potato sticks, which I also ate as a kid. They’re thick and easy to grind into uniform nubs, so they retain crunch in the finished crust. The “jelly” part, though, is a bit inaccurate because I only ate strawberry jelly on my sandwiches. But the sweet-tart flavor works so well here and cuts through the light richness of the bars. Plus, I think grape jelly can be found in more kids’ sandwiches than strawberry can.

Since already-sweet Concord grapes are usually cooked down with more sugar for all applications, I treated them simply, searing them briefly so they retain their juicy freshness while deepening in flavor. And NO sugar. This requires precise and careful halving, seeding, and cooking and is not for the impatient. So I also tried (see below photo) making a compote that required less meticulous knifework and it was also delicious. But if you want to completely skip seeding, I recommend making a coulis and straining the seeds. 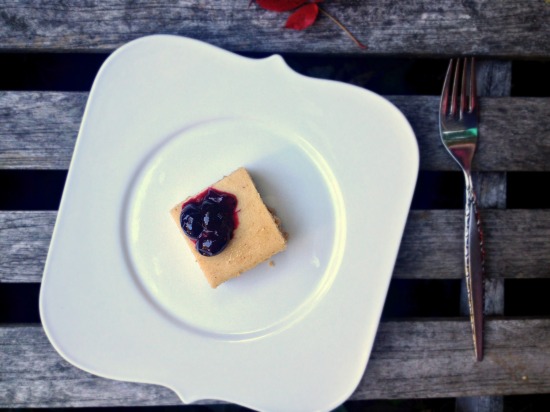 It wasn’t really until the last week of August that I got into the beat and flow of summer. It was at that point that I started taking time each day to savor its presence. In doing so, I also ignored the first days of fall, holding up my picket signs by ostensibly flashing the white, the bare legs; walking around with always-sticky fingers from staining berries and ripe stone fruits; eating more ice cream than I should (but I do that year-round); and hiding from the truth behind sunglassed eyes.

And here we are: It’s the first week of October, I’ve gone out at night with gloves on, and my favorite apple orchard, Russell Orchards, is already through with pick-your-own for the season. So I will officially begin celebrating it now, with these cheesecake bars. 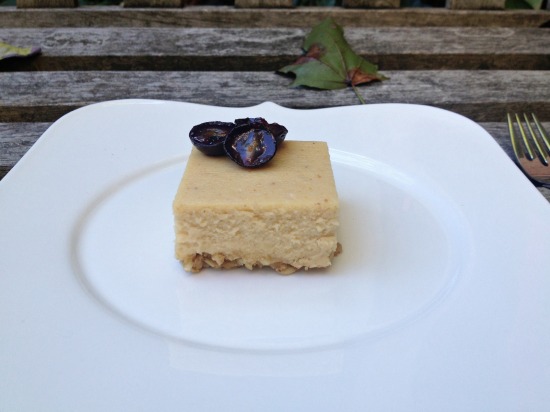 I developed this recipe using natural peanut butter, like I do all peanut butter recipes, because there are too many which restrict you from using it. If you’re using regular PB, like Skippy or Jif, you can omit the cornstarch, though it does help the cheesecake bake more evenly. I find it easier to work with peanut butter that has been stirred and then refrigerated. I used French’s potato sticks for this recipe. If you’re going to use regular chips, I recommend Ruffles or another thick chip, preferably with ridges, that won’t grind to smithereens. Do not use kettle-cooked chips or thin regular chips. If you’d rather take some of the difficulty out of preparing the grapes, you can cut and seed them (without making sure they’re in perfect halves and intact within the stems, and cook the grapes with a pinch of salt over medium-low, stirring occasionally until they break down and form a compote as in the fourth photo. It’s equally delicious just not as fresh tasting.

2. Transfer 33 grams (1⁄3 cup) oats to food processor and process until fine oat flour forms; return flour to bowl with whole oats. Process potato sticks in now-empty food processor until chopped into ¼- to ½-inch-long pieces, about 45 pulses; transfer to bowl with oats. Toss oats and potato sticks together with cinnamon and salt. Melt butter in small saucepan over low heat; stir in brown sugar to liquify. Pour butter-sugar mixture over oat mixture and stir with rubber spatula to thoroughly moisten and combine. Transfer oat mixture to baking pan and pack into compact, even layer with bottom of measuring cup. Bake crust for 20 minutes. Remove crust, brush lightly with egg white, return to oven for 1 minute, then let cool completely on wire rack. Reduce oven temperature to 325 degrees.

3. Beat cream cheese and peanut butter in stand mixer fitted with paddle at medium speed until completely velvety smooth and light, about 4 minutes, scraping down bowl with rubber spatula frequently. Add sugar and salt and continue to beat until sugar feels dissolved, 1 to 2 minutes. Reduce speed to low. Add eggs, one at a time, mixing after each addition until combined (20 to 30 seconds). Scrape down bowl. Add sour cream and vanilla and mix until combined, about 30 seconds. Give batter final stir by hand. Transfer batter to baking pan (do not scrape sides), and smooth into even layer. Bake until edges are set, center jiggles slightly, and cheesecake registers 158 to 160 degrees, rotating pan halfway through baking. Carefully run thin knife around sides of cheesecake and let cool in pan completely, about 2 hours. Refrigerate cooled cheesecake for at least 3 hours or up to 1 day. Slice into bars. (Most cheesecakes can be stored for up to 4 or 5 days, this one included, but I recommend serving it within 1 or possibly 2 because the granola-like crust loses it’s cripsness. However, I certainly ate the bars for 5 days…)

4. Meanwhile, lightly coat small skillet with olive oil and heat over medium heat until shimmering. Place grapes in pan, cut side down, and sprinkle with salt to taste. Cook in batches of 30 grapes or so until browned on cut side, abut 2 minutes. Serve cheesecake bars with grapes.