I was in Brittany once, but I can’t tell you too much about it. My French host family took me to Vannes, a commune in the Morbihan department, after a very early sweat-and-alcohol-soaked morning with my “sister” Aurélie and her friends at the discothèque. I was 16 years old.

The family must have told me where we were going, but even though the Visine made me look awake, I most certainly was not. And so, I didn’t know where we were until I saw the region’s reed-roofed houses out the car window. I failed to take in the scenery; my main focus was trying not to vom all over the back seat. That would have been just too horrifically American. The drive wasn’t long—I’d say about an hour and a half from the family’s home in the Haye-Fouassière commune of the Loire-Atlantique. (In fact, the Loire-Atlantique was a Breton territory pre-Vichy France.) But it was very uncomfortable, as I undoubtably smelled like a combination of some Jacques-ass’s armpits and the inside of the thong that I found stuck to my shoe as I walked out of the club hours earlier.

Brittany was so wonderfully Brittany that it was almost a parody of itself. We walked down Vannes center’s cobblestone streets, which were lined with medieval, wood-paneled buildings and dotted with vendors skillfully flipping lacy buckwheat crêpes. When we’d arrived, like clockwork, the bagadoù, a traditional Breton band of bagpipers, marched through the square, and children, playing tag or swinging wooden yo-yos, squealed and ran to the side to allow for their procession. It felt a lot like that scene from my favorite of the 1970s Rankin-Bass stop-motion TV Christmas movies, Santa Claus Is Comin’ to Town, in which the children playing in the streets scurry away to allow for the Burgermeister’s passing, except the scene in Brittany was much happier and less German.

The shopkeepers in Vannes spoke Breton, French, and Gallo. At that point in my French studies, I was just lucky enough to have mastered the critical difference between excité and surexcité (where my Francophones at?), so I tuned out people to avoid further confusion. We walked around the town for a short while before taking a scenic drive through the region to look at the sea, hills, and homes. We headed back as the sky darkened—it was an uncharacteristic pink for that time of year—and I struggled to keep heavy lids open.

So yes, I knew that I had been in Brittany, but the exact Vannes location wasn’t confirmed until I got home and Aurélie’s mother handed me a small paper bag. Inside was a candy tin that was painted sky blue. The black-and-white flag of Brittany took up one quadrant of the cover; figures of Breton women in traditional garb took up another. There had to be 30 salted butter milk caramels in that box—fat, deep brown ones wrapped in thick cellophane. Because the salt that is harvested in the region is prized (this is where fleur de sel comes from), and because the butter from Brittany tastes like no other dairy on the planet (you can eat Breton butter with a spoon), the area is known for its salted butter foods. Had I known what kouign amann or sablé Breton were at the time, I would have cried over not having acquired one of each that day. But while salty caramel goods have been on-trend in the US for around 10 years, salted caramels originated in Brittany. They are the absolute best, and if you are a person who orders frilly café drinks with salted caramel “syrups” in them, you probably deserve to be drowned in the Bay of Biscay, because your $5 purchase is an insult to the real thing. 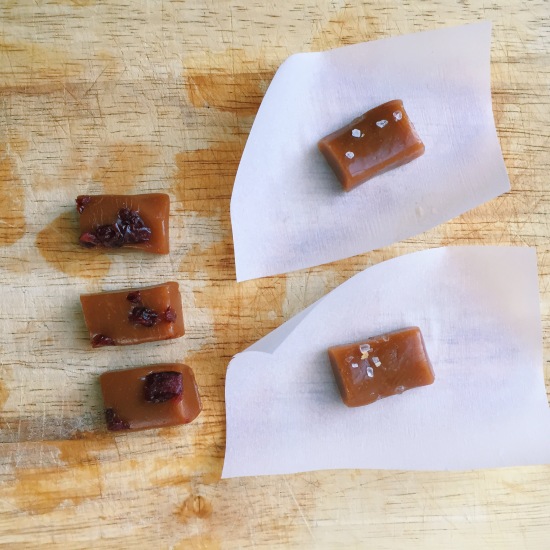 I thanked “mom” for her generosity—this tin was the most precious of gifts for a teenager with a budding interest in food—and I retreated to my room early since I was so exhausted. Just before sleep, as I wrote about the day’s events in an oversized composition book, I unwrapped a caramel. The chew was just as I liked; the caramels had enough pull that my head jerked forward a bit as I yanked the square from between my front teeth. The salt flavor was clean and present but mellowed by the creamy sweetness of dairy. The caramels were dark; I imagined a brawny Breton woman stirring a copper cauldron full of sugar until it was almost burnt. The French are good about bringing their food to a flavorful deep brown, and American candies and baked goods seem sickly pale and sweet in comparison.

I lounged in that hard, pillow-less cot, a foot above the floor, and I ate caramel after caramel—probably 10 a night—under sad yellow light. In three days, the candies, which I’d wished to share with my caramel-loving mom when I returned, were all gone. Curiously, I had stored all the crunchy, sugar-slicked empty wrappers in the tin, as I was afraid that my modest French family would find the evidence of my gluttony. Home to the US I went, a tin full of wrappers in my luggage.

I’ve made caramels countless times since that trip and each time I break out the heavy-bottomed pot, the wooden spoon, and the thermometer, I think about myself in that situation, sheepishly gorging on caramels and just trying to get by without a daily shower and someone who spoke English.

Salted caramels are the best, but over the years, I’ve made fragrant rosemary-infused ones, seasonal apple cider ones, crunchy honey-cashew ones, and (purposely) burnt ones. They’re always delicious, though without that Breton butter, they can never compare to the tinned treats.

This year, I really earned my Francophile card when I edited a magazine called French Favorites and made our test cook order hundreds of dollars worth of duck fat, confit 24 duck legs, make cassoulet with half of the confit legs, and then divide the rendered duck fat among our team members—all while singing La Marseillaise. After cooking some delicious eggs and potatoes, I used my liquid gold to make duck fat caramels, and I blew through the rest of my supply because these candies were hard AF to get right. You can’t just swap the same weight of duck fat for the butter in a classic caramel recipe. Butter is largely saturated fat, while duck fat is largely unsaturated, making it liquid at room temperature (and maybe even good for you!). That means softer, greasier caramels. But if you cut back on the duck fat, its savor won’t come through, and then what’s the point? So I reduced the amount of heavy cream, little by little, to firm up the caramels. I didn’t lose too much cream, as it carries the duck fat’s flavor and creates a smooth consistency. Still, these caramels could be slick to the touch. Adding a pinch of starch (which gets my Francophile card revoked) in the form of cornstarch to the cream–duck fat mixture emulsified it, and kept the unsaturated fat from separating out. Also, once I added the cream–duck fat mixture to the lava-hot caramel, I whisked furiously—way more than I would with typical salted caramels—to encourage the emulsion to hold. I also cooked the caramels to a higher temperature for the perfect chewy texture. To top the candies, I liked sea salt or chopped dried cherries (cherry is a natural pairing for duck).

These caramels are a little ducky in that there’s a deep, salty savoriness that comes through, yet the duck averse still enjoy them—they just seem “complex.” They’re not overly unctuous. I did have one coworker say “EEEEEK, they taste like duck!” when I brought one of the early batches. To that I say, “chacun à son goût.”

You wouldn’t find one of these babies in Brittany. Or maybe you could. I guess I wouldn’t know.

You can use the warmth of your (clean!) fingers to shape the caramels into little logs before wrapping. Or just keep them as rectangles/squares. I like the caramels equally topped with sea salt and with tart dried cherries, so I top half the pan with salt and half with dried cherries. Cook the final caramel to a temperature that yields a caramel you enjoy, but do not cook it to less than 252 degrees. The properties of duck fat make these caramels softer than butter caramels. Above 260, however, and they will be too hard.

2. When caramel is deep amber, turn off heat and add cream mixture (mixture will bubble furiously). Place pot over medium-low heat and whisk mixture constantly until it registers 255 to 258 degrees. Immediately pour caramel into prepared pan. Transfer pan to wire rack. Let caramel sit for 5 minutes, then top with sea salt and/or dried cherries. Let caramels sit at room temperature for 2 hours. Remove caramels with parchment sling and cut into pieces and wrap or serve. (Wrapped caramels can be stored at room temperature for up to 1 week for optimal taste and texture, but they’ll certainly be tasty if kept for longer.)