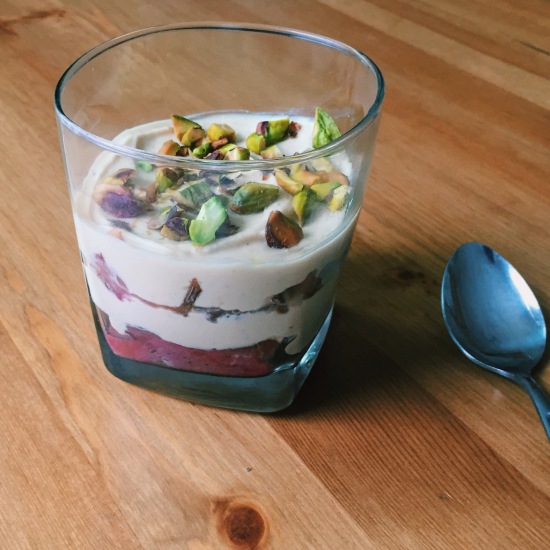 I’m falling asleep as I type this. I’m looking at words appear on the screen and feeling fingers tapping but not quite understanding the force that moves them. At the end of the day, my fingers are bloated so they fall with more weight than normal on the keys. I’m blasting wordless electronic music; it’s raucous enough to keep me from taking a nosedive into the keyboard but it doesn’t distract me.

I’m trying to challenge myself with this thing here. I hesitate to call it a blog because it’s typically just this whitespace that I fill with vomit—whatever alphabet soup of thoughts and tastes that I’m holding at the depths of my bowels that week. (I also just hate the word “blog,” but I’m apparently unbothered by the words “vomit” and “bowels.”) But I need to create. It’s practically summer now, and the produce is becoming abundant. I have years worth of notebooks filled with recipe ideas for that produce because my physical output never matches the speed at which I dream up these things (one blog post takes me two full weeks of work—writing recipes, buying ingredients, testing, retesting, reretesting, transcribing, photographing, writing, editing—despite the low-budget quality you see). So I’m trying to stick to a recipe every-other week regimen even though in the past I’ve said, “F— it, I ain’t gonna post anything if I don’t wanna, because that’s not authentic and the content will suck if I’m not feeling it.” I become anxious when I don’t create, so I’ll need to abandon that philosophy slightly without compromising my ideals. I need to make things or my mind wanders; I feel useless. This space is a distraction from that feeling.

In embracing this idea, I admit that not every recipe needs to have a story. And the written content doesn’t have to be that good because it serves no real purpose for anyone other than myself. A story-less recipe can taste good. And I really like testing these. It would be a shame not to share them somewhere. Or at least put them out there as a sort of kitchen portfolio, in the way that artists do so for their canvases. So tonight I’ll stay awake. I’ll transcribe this recipe. I’ll create. 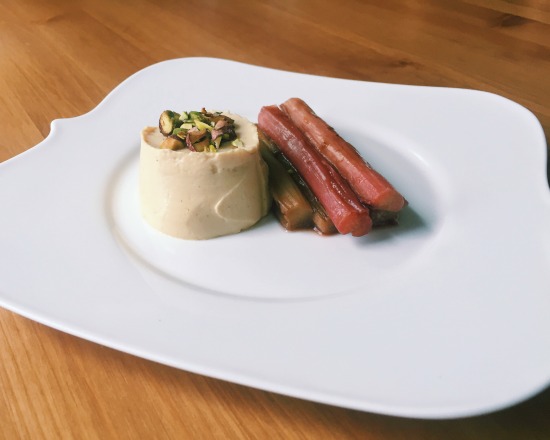 Don’t roll your eyes: This recipe sounds fancy. And I plated it fancy-like because I didn’t know how to do it without it looking like shit, and while I like the parfaits, they’re very rich—a fine portion for a normal person, but a bit large for me, someone who really doesn’t like dessert. But that’s not to say that the dish is too sweet—far from it. The rhubarb is floral, scented with rosewater; but sprinkled with just a bit of sugar, it stays acerbic. (I prefer to embrace rhubarb’s tartness rather than mask it; that’s why I use it in so many savory dishes.) And the recipe is frightfully easy and has a shorter ingredient list than most here.

To balance that pleasantly bitter rhubarb is creamy white chocolate, though its sweetness is tamed and deepened because I caramelized it. I was on a caramelized white chocolate kick when the technique first became trendy—one of my favorite recipes on this blog involves it). (I’ve caramelized milk chocolate too—also lovely.) And then I took a break because everyone else was doing it (call me the chocolate hipster). I’m glad I’ve circled back, because this nutty, toasty-tasting confection has a variety of uses. Here, folded into thick Greek yogurt, it makes a faux crémeux (a thick, lush French pudding) with a tang that tastes perfect with the tart rhubarb. Some buttery and salty toasted pistachios give the dish texture and prevent it from being retirement home food. 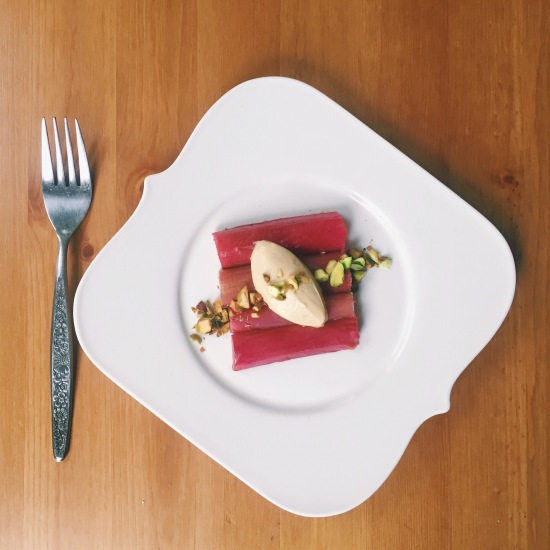 Recipe posted. Anxiety quelled. Check that off the list, and I hope to have another one in two weeks, whether there’s a story or not. For now, I sleep. 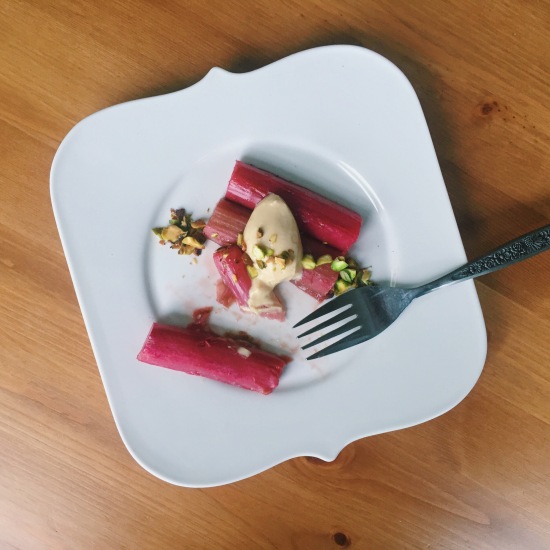 Do not get a speck of water near the chocolate or it will seize. Be sure to use a white chocolate with a minimum of 30% cocoa butter. Guittard and Valrhona work best. Green and Black works but takes an unusually long time to caramelize. If you use another chocolate such as Ghiradelli or Callebaut with a lower cocoa butter content, toss the chocolate with 1 tablespoons canola oil before baking. You can make quenelles of the yogurt to top the rhubarb (see pic 3), grease a cookie cutter and use it as a mold (see pic 2), or make a parfait (see pic 1).

1. For the yogurt: Adjust oven rack to middle position and heat oven to 265 degrees F (if your oven does not heat to this temperature, set it to 250 degrees).

2. Spread white chocolate evenly over rimmed baking sheet. Bake in oven for 10 minutes until melted. Scrape chocolate from pan with spatula and spread into an even layer. Repeat this process, scraping and spreading every 10 minutes until deep peanut butter color (the darker the better, but it cannot get to the point of drying out), about 1 hour. (Don’t worry if it looks lumpy and unpleasant midway through the process; it will smooth out.) Strain white chocolate through fine-mesh strainer to remove any remaining little lumps. Stir in salt. Let caramelized chocolate sit for 10 minutes, then fold in yogurt until combined. Press plastic wrap against surface of yogurt and refrigerate for at least 3 hours.

3. For the pistachios: Melt butter in small skillet over medium heat. Add pistachios and salt and cook, stirring, until toasted.

4. For the rhubarb: Heat butter in large sauté pan or skillet with lid of medium-high heat. Add rhubarb, flat side down, sprinkle rhubarb with sugar and salt and cook until browned, about 3 minutes. With a thin metal spatula, carefully flip rhubarb and sprinkle with rosewater; cover and cook until rhubarb is tender, 1 to 3 minutes. Carefully transfer rhubarb to plate and let cool. Serve rhubarb with yogurt and pistachios.